Regressive vs. Progressive Taxation.  From the NYT, September 17, 2020.

Listening to Bob Woodward discussing his book RAGE as regards General Mattis and Dan Coats and why he thinks they really haven't come forward yet to verify elements of his book.

The Flag I Knew but Never Thought About.

I’m a product of the South. I grew up a southern white boy in the 50’s.  I went to all white schools and lived in all white neighborhoods.  I had all white friends and dated all white girls.  I read books about the civil war exploits of confederate soldiers.  I watched movies dramatizing the antebellum south. I watched TV shows like “The Gray Ghost” glorifying the exploits of John Singleton Mosby (Mosby’s Raiders).  I listened to my grandmother talking about her father, my great grandfather, who fought under Stonewall Jackson at Chancellorsville.  Yes, I’m a true “son of the confederacy”.  To me the Confederate flag was a sign of a proud heritage and second only to the American flag.   The problem was I never thought about the other side of the meaning of that flag.
We in the south, and when I say that, I mean we white people in the south grew up glorifying the confederacy. We lived, we breathed it, it was just part of us.  I never thought about the real meaning of the flag and the reasons for the Civil War.  True, I studied it in school, but I studied it in a southern school with a southern curriculum.  It was just as much "The War for States Rights" or more strikingly the "War for Southern Independence" as it was the Civil War.  We studied more about Bull Run then The Battle of Appomattox and Sherman's March to the Sea was a horrendous uncalled for excessively brutal treatment of the South.  I learned about slavery but what I learned about slavery was that most slave owners treated their property humanely and that most white families cherished the relations they had with their black families and there were only a few owners who treated them cruelly.  I'm sorry this is what we were taught.
I am now an old man in the twilight of my years.  I look back upon my childhood and see that I sure missed a lot in those days.  There was a whole other world out there of people that were on the other side.  Sons and daughters of sons and daughters of the slaves that were that property.  What our white view was not what their black view was.  Where I looked at that flag and saw pride, they grew up looking at that flag and saw fear.  What I experienced growing up was institutionalized racism, what's being called today systemic racism, and I was ground into it.  That's the problem today.  So many of us grew up the way I have described and never even knew it.
There was a lot of things we didn't know.  We didn't know how it felt to be relegated to the balcony of the Carolina Theatre and have to enter through the rear door.  We didn't know how it felt to be sent to the back of the city bus or have to drink out of the colored only water fountain in the Kress store or not be served at the lunch counter or not be allowed to use the public toilet unless there was a "colored" one available.  Yes, I lived those days but didn't experience them.  Over the years I have often said that had I experienced them I probably wouldn't be here today.  True, black men my age have had to endure a lot more than I have and are probably more scarce then my kind.
So I am not surprised at all about the feelings and emotion that erupting today in the Black community and the awareness that seems to be coming about in many of us in the white community.  It is long overdue.  We thought that when Obama was elected we had transgressed into a new era.  Oh how wrong we were.  His election did bring out a degree of pride and personal worth to the black community but it brought a lot of anger, animosity and fear in the white community, but suppressed until the advent of Trump.
The election of Donald Trump, with his say it like it is type of personality and his bully mentality allowed white people with racial tendencies to just let it rip.  So it's no wonder that after nearly 4 years the country is like a powder keg.  Lets hope there is enough young people with sense who haven't grown up like I did that can make this country whole again and fix a problem that has been festering for 150 years.
at June 13, 2020 1 comment: 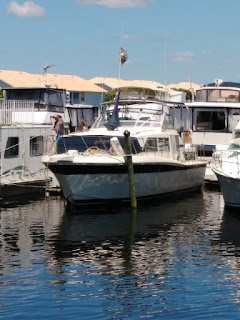 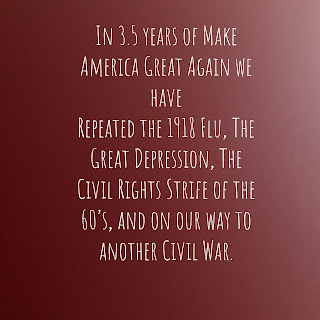 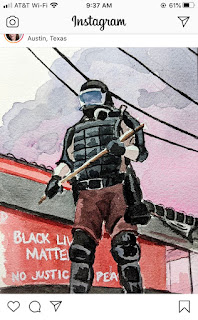 My niece Hanna is turning into quite an artist.  Very proud of her. 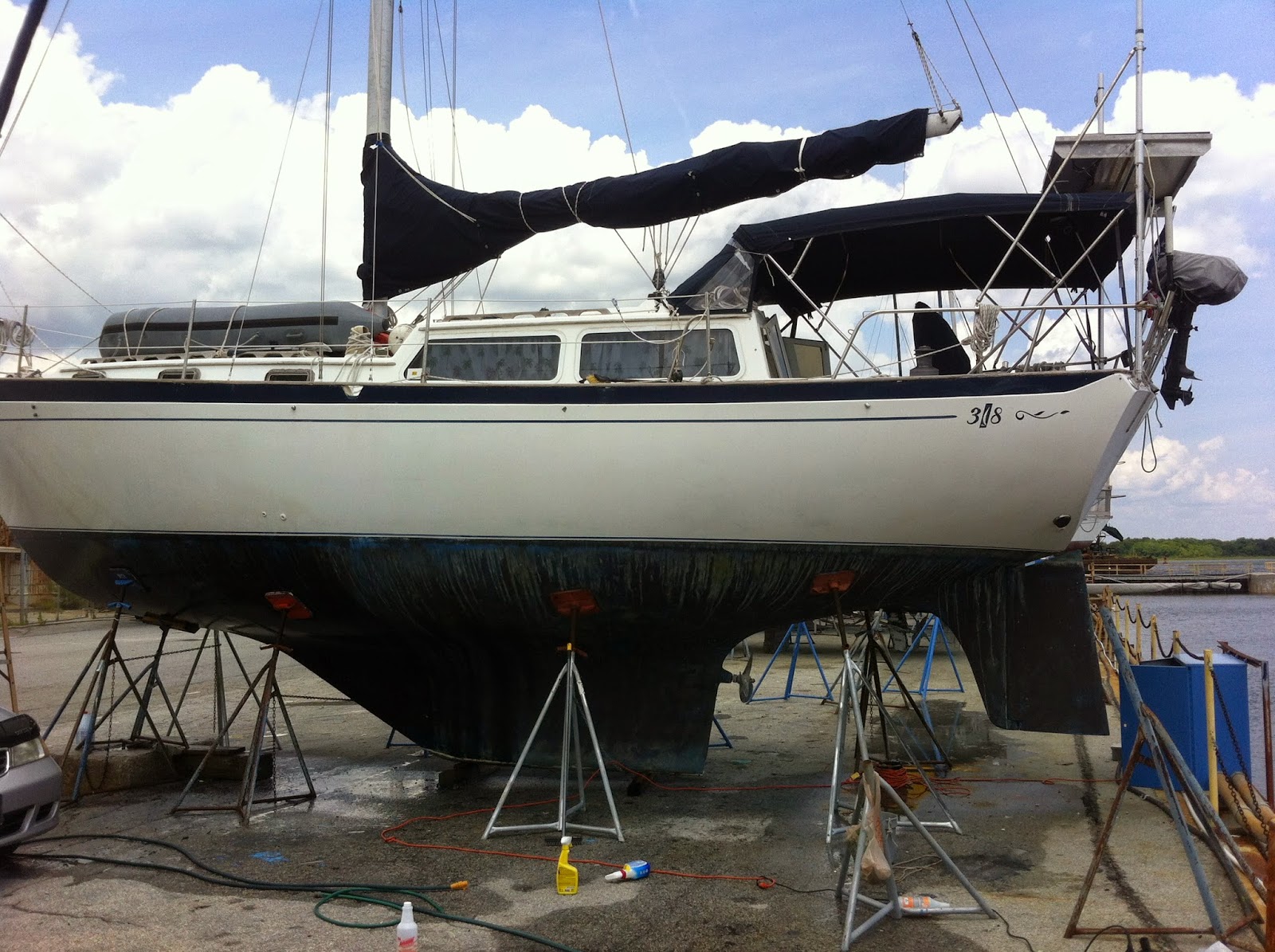 So Dave Arnold and I stayed at the Cooper River Marina for about 3 weeks.  While there we installed both a oil guage and a temperature guage.  While testing the oil sensor we found that the prop had become separated from the shaft once again so the fix we had at Amelia Island only last about two weeks.  Moved  the boat to Pierside Boadyard to do the bottom and have the prop reinstalled.  Nelso at Palmetto Props had a bronze bore reducer made for me and a new key machined to bid the shaft and prop.  I will never go back to Pierside as they really screwed me at the end of which I will not go into on this form. 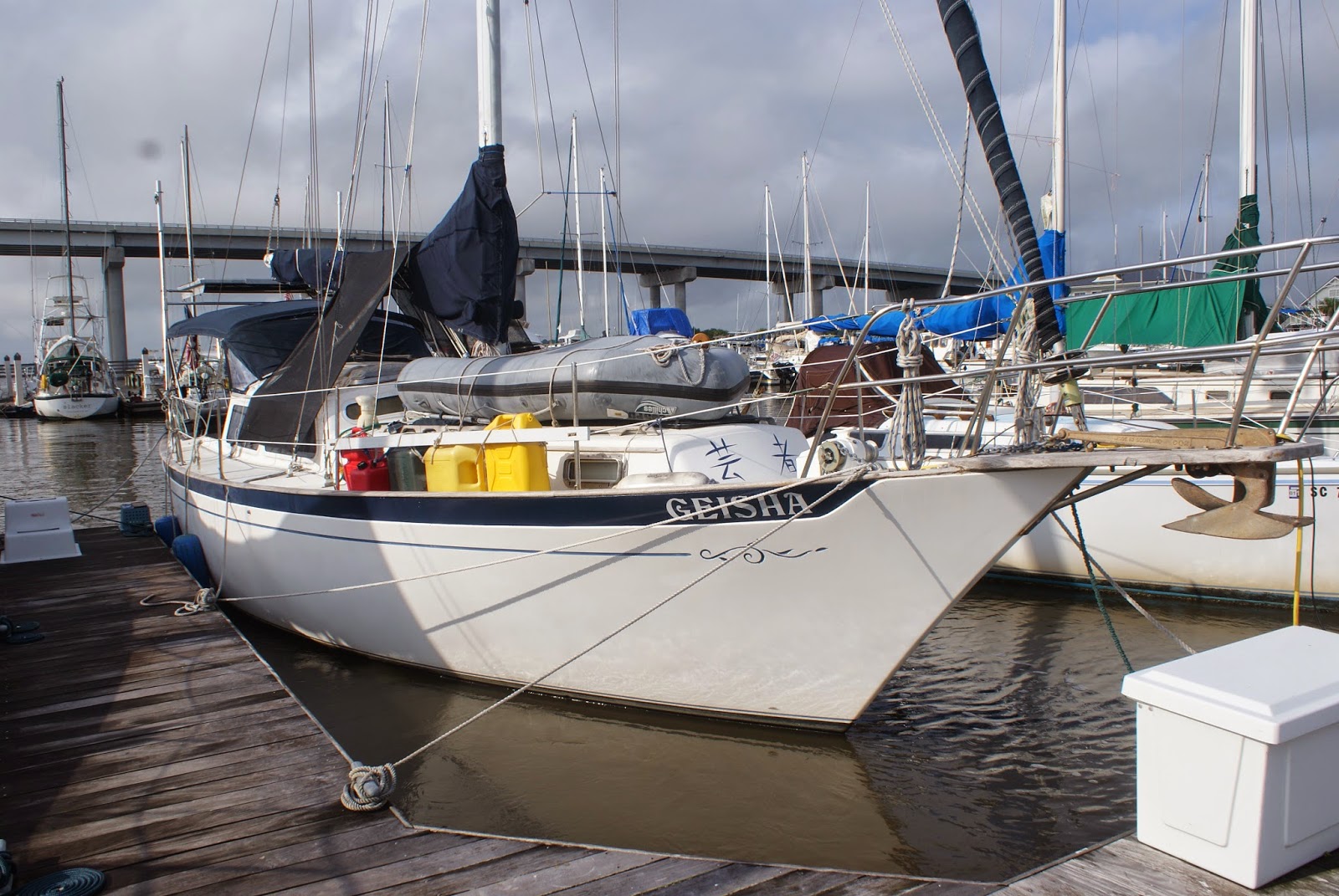 After vacation with China in Florida and house sitting for Carol I moved back on the boat and
moved it to St. Johns Yacht Basin on the Stono River.  Really nice marina, very comfortable with floating docks, pool and bar/restaurant. 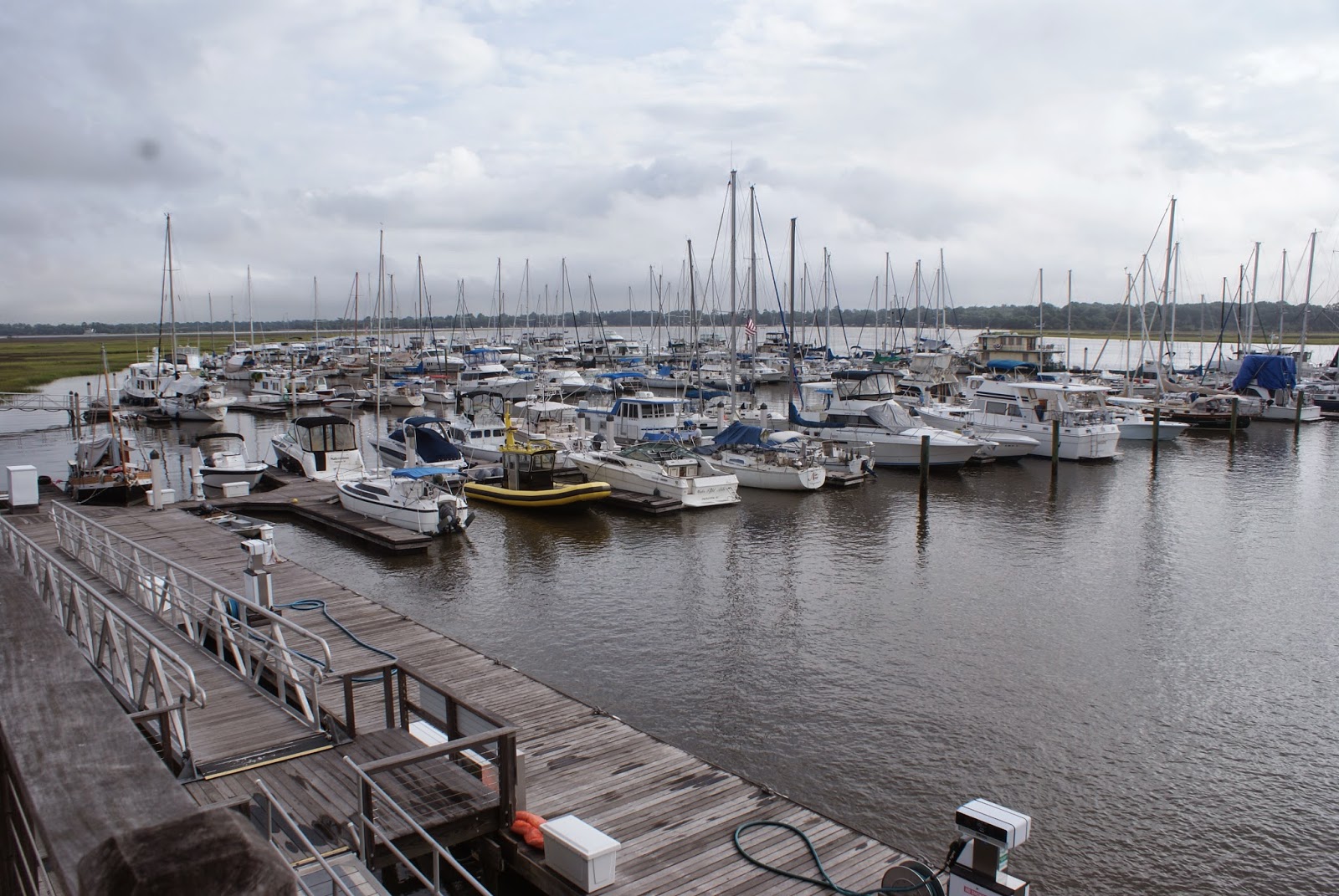 Charleston provides a good market so I have pretty much decided to keep the boat here and put it on the market.  In the meantime I will purchase a more comfortable livaboard boat for my slip in Boca Chica.  Have looked at a few boats already in Florida and plan to look at a couple more this week.
at August 11, 2014 No comments:

So let me catch up with this adventure or more aptly "tale of woe".   Left Fernandina Beach at about 6:30am on Sunday morning.  Had a beautiful day sail. Weather was 5-10 out of Southeast   Made great time all day with GPS predicting our Charleston arrival at around 6:30am. Great 24 hour run, but not to be. Even caught a nice blackfin tuna.


The winds predicted approaching Charleston 5-10 out of the north turned out to be 20 out of the northeast, right on our nose.  Waves and wind slowed us to 1-2kts putting us in Charleston at somewhere late afternoon. Too much pounding to weather for two senior citizens.  We turned around and headed for Port Royal Sound, 33 miles away to the south. We were 25 miles from Charleston at the time.  Neither Dave nor I had ever entered Port Royal so it was daunting with a steady 20 kts out of the Northeast.  The channel approach is due North for nearly 5 miles, then a turn of about 30deg to the west for 6 miles putting the waves on our beam. Thankfully the channel is well marked and deep.  We made it in though, fueled up at Port Royal Landing, where I now have some of the rubber from their floating dock on the port side of my boat.  Kissed it a little hard and Dave forgot to put out the fenders.  Took a ball at Beaufort town marina for $20 and had dinner at Luthers.

Dropped the ball at 6:15 and requested bridge opening with 2 boats following us through.  Let them pass thinking they were more familiar. Great move until we tried to enter the Ashepoo Cooshaw cut.  The boat we were following went aground and us right behind him.  I tried to go right but too late we went into the mud.  Luckily I was able to back off.  We anchored, thinking we would wait for more tide as it was very low.  A passing trawler gave us a heads up on the proper course so we tried it again snd made it.

Yesterday was not a good day. Ran aground again in an area that should have had water. Tried to get off and must have had the prop in the mud because it sheared off the prop to shaft key.  TowBoat to the rescue again as they had to get us off the mud, then tow us into Amelia Island yacht basin.  Have the boat on the travel lift now and the yard mechanic is having to make a custom key out if key stock he had at home.   Cloudy and rain today.   Saturday looks like a good day to make for Charleston to offshore.  Enough of the running aground  bullshit. 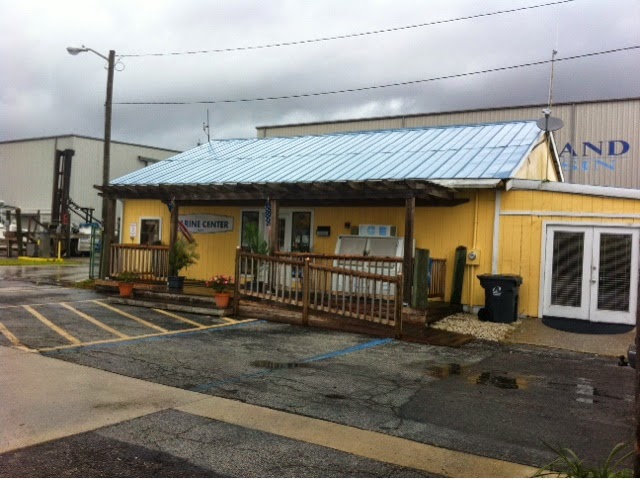 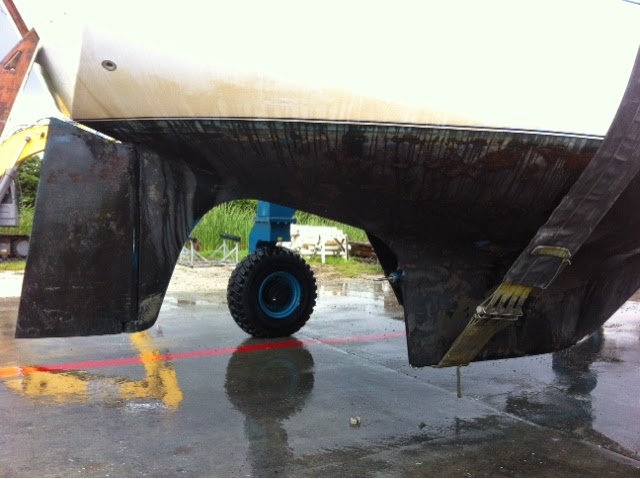 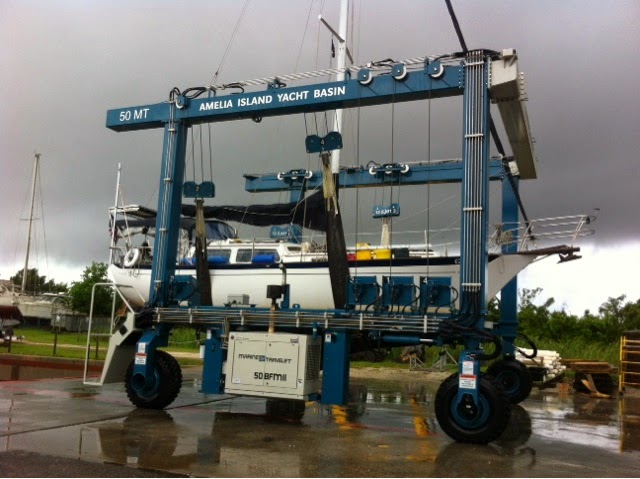 Regressive vs. Progressive Taxation.  From the NYT, September 17, 2020.   IDEA OF THE DAY: THE ‘FAIR TAX’ Many states have tax systems that...

Richard
United States
Retired Navy CPO and avid sailor and writer. Live part of the year on my boat in Fl. and the rest of the year taking care of my rental units in Indianapolis, In. After retiring from the Navy, I spent many years working as a business development professional for a couple of aerospace companies specializing in satellite attitude determination and control. During my third career founded a Restaurant guide and magazine in South Carolina. I have an eclectic taste in music, books and food, so there is not much I don't like to eat, drink or read. I enjoy meeting new people and entertaining, give me a microphone and I'm happy. For the past several winters I have been driving a tour trolley for Historic Tours of America in Key West, Fl. If you plan on visiting the Florida Keys during the winter months, (where it is warm) give me a call and I'll tell you all about the area and its history. As a host I would hope my guests would take care of my place like they would take care of their own and as a traveler I promise to do the same.