Every year during the third week in April, Key West celebrates the Conch Republic Days.  It all started back in April of 1982 when the United States Border Patrol decided to place a road block on US Highway 1 just South of Florida City.  Since this was the only road in and out of the Florida Keys it really put a crimp on the local economy.  They were stopping traffic in both directions, check identification, searching cars and generally doing what they wanted.  Since this was the US Border Patrol and not the County Sheriff or the local or state police they had essentially created a border between the mainland of the United States and the Florida Keys.

The Mayor at the time, Dennis Wardlow went to the Border Patrol and pleaded with them, but to no avail.  He even tried to get an injunction but the Dade and Monroe country courts had no jurisdiction over the Federal government.

Key West has always had reputation for going its own way anyway, so Wandlow, came back got with the City Council and decided that if the Federal Government was going to treat them like a foreign country, then maybe we ought to be one.  So they voted to secede from the union and declared that we were the Conch Republic. They then declared war on the US and went out in the harbor on small boats, with Conch Republic flags flying, found a couple of Navy ships and threw loaves of bread at them as the first salvo of the war, which we called the Bloody Battle.  None of this had any affect on the Border Patrol but we got a lot of publicity in the national media.  It must have got somebodies attention because on April 23, 1982 the Border Patrol removed the roadblock and we have been celebrating our victory over the USA ever since.

Now every year in April we celebrate that victory for 10 full days.  It starts with the longest parade in the country beginning at the Atlantic Ocean and going to the Gulf of Mexico.  We then have our drag races on
Duval Street, not with high powered engines, but with high heels, it is Key West.  We culminate with our reinactment of the Bloody Battle in the harbor were our Conch Republic Navy, consisting of about 15 boats sporting trash pumps as "big guns" take on volunteers from the Coast Guard.  This is all observed by 8-10 thousand people lining the boardwalks and Mallory Square at sunset.  Afterwards we all retreat back to Schooner's Wharf Bar for the formal surrender.

For the past two years the SV Geisha has participated in the Bloody Battle.  Below is a picture of the Skipper and China.  There were about 10 others on board at the time.  We all got real wet but had a great time. 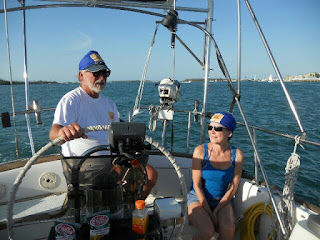